Along with the sound of a body falling in the ring, the entire “Diamond Heart” club was like a blasted pot, and suddenly a loud and noisy shout!

The whole space, filled with crazy cockroaches, sweat odor everywhere, and the faint bloody smell in the air.

From the boxing ring surrounded by many audiences, as well as the two men on the stage with naked upper body and gloves, they can be inferred that this is a club that holds underground boxing.

At this point, the confrontation on the platform seems to have been separated.

On a boxing ring illuminated by a spotlight, a white man cover in blood was lying there.

If it is not the body that still vibrates slightly, it reminds everyone that he still has the gas. Perhaps, at this time, the medical staff who have been preparing for a long time have already rushed to the downfall.

However, this is also a matter of time.

With the countdown of the referee, the mood of everyone is gradually rising to the highest peak.

The last number “one!” was counted, and the referee crossed his hand and announced directly.

At the same time, the entire club filled with deafening screams and cheers once again.

Unlike the madness of the audience, the winner who stands still in the ring, a tall muscular black boxer is unusually calm.

He did not wait for the referee to pull up his hand to declare that the victory belongs to him, he turned around, pulled the rope, and walked down the ring.

The quiet back is in stark contrast to the noise of the audience.

At this moment, a middle-aged fat man wearing a sequined suit and unable to speak, holding a microphone in his hand, board the boxing ring.

He saw his face flushed, the fat on his face, accompanied by the excitement of the tone, shaking up and down.

“Friends! What a wonderful night! Tonight’s boxing match, as you can see, has already won the game!”

“The winner is still “diamond” we are invincible!!!”

With a big hand, the lighting engineer at the scene is also very sensible to put a bunch of spotlights on the black boxer who is going to the lounge.

Under the illumination of the lights, the explosive muscles of the black boxer will make the cheers on the scene even higher!

Even many of the audience screamed his name together.

However, the enthusiasm of the fans did not stop the black boxer and stopped half a minute.

In this way, he walked into the lounge in a burst of support.

The fat man on the stage is also very timely to solve the black boxer.

“Well, our warrior, still do not like to talk. However, he used his fist to talk, you should have seen it!”

With the provocation of the fat man, the audience once again responded enthusiastically.

“So, let’s move on to the next big showdown!”

He ignored the boxing ring that how busy it was. The black boxer who returned to the lounge, took off his gloves and threw it away, and sat down on a chair.

Then, slowly began to dispel the bandage on the fist.

After removing all the restraints on his hands, he got up and walked to the bathroom next to him.

When passing through the mirror in the bathroom, his footsteps could not help.

He saw him quietly looking at himself in the mirror, his eyes are godless.

In the mirror is a man who hides a huge pain from his past in his heart.

However, it is very interesting that the man who just won out from a fierce underground boxing match, from his face and body, could not see the slightest scar!

In general, in this case, there are only two possibilities.

One is that his evasive technique is excellent, and he fights opponents without injury!

The other is that his strength is too strong, and he has not waited for the opponent to attack, just defeat the opponent in three or two!

These two possibilities, no matter which one, can not help but awe!

This is, perhaps why, the audience on the scene, so loudly shouting his name.

Looking at himself in the mirror, the memories of the boxer’s mind are like projectors, flashing back instantly…

His name is Luke Cage, a boxer who specializes in playing underground black boxing. 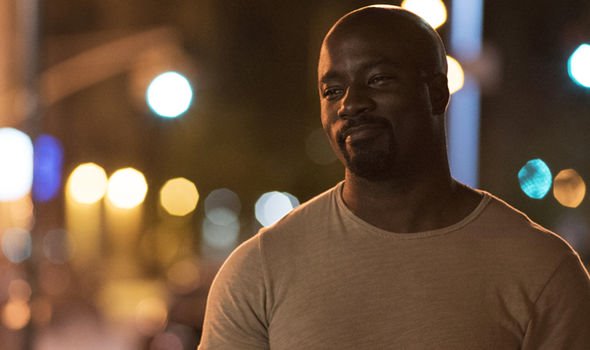 Three months ago, in the “Diamond Heart” club, he played his first venue, the boxing match, and opened his own black boxing career.

In just three months, a total of fifteen games have been played, and the record is…

Moreover, in every game, he is in an innocent state, and the opponent is beaten to the ground.

Because no matter how many times the opponent hit him, he did not leave a trace of scars, so he gradually became the name “Diamond”!

And as his fame grew, the boss of the club, the one who was just on the stage, Mr. Adam, saw a huge business opportunity contained therein. And Adam signed a contract with him.

For him to arrange accommodation, give him 30% of the ticket income, he will be the treasure of “Diamond Heart” boxing club town store…

In return, Luke Cage plays a boxing match in “Diamond Heart” every week!

In this condition, Luke Cage, who has just experienced the pain of losing his wife and still immersed in grief, did not refuse and signed on the contract.

Some people use alcohol to paralyze themselves. And he chose to fight in the fierce fight of the boxing to the meat, letting himself temporarily forget all the unpleasantness.

Perhaps, deep down, he is not a person as strong as his soul and the flesh.

Sometimes, he needs something to make him forget that the person he loves is far from his own.

Just then, Luke Cage, who is still standing in front of the mirror, come back in an instant.

He shook his head and keep his messy thoughts in his head to the side and looked at the door.

He saw a black boy standing at the door said to him: “Hey! Man, Adam told me to call you out.”

The black guy whispered and explained.

“There is nothing, It is the club who has a rich guy, with two girls, he opened a few bottles of wine, he saw your prestige on the stage, so he wants to have a drink with you. “”

“Adam couldn’t reject him, so he let me ask you…”

After listening to it, Luke Cage’s expression did not change, and he refused directly.