Suddenly a crisp slap’s voice fell in the palace.

Everyone was stunned because Prince Vegeta actually slapped Saron in front of so many people.

Prince Vegeta’s attitude towards life is like ‘don’t waste the time in talking nonsense’.

Saron had felt a little dizzy, he was actually slapped by a Saiyan?

He touched his cheek, burning pain, and then he felt a little sticky on his hand, he checked his hand and became shocked.

“Blood! You actually hit me!” Saron shouted, his eyes were red, and his handsome face was already showing a sly color.

“You didn’t remember the slap before seeing blood.” Vegeta sneered and said.

“I will kill you today!” Saron yelled angrily.

The key issue is that Saron thinks his noble blood was actually wasted by a wild Saiyan monkey, which makes him a little angrier.

After saw Saron anger, King was so scared that he quickly stopped his son behind him and shouted: “Saron, what do you want?”

“What?” Saron shouted crazily. “Today, I want you and your son to pay a heavy price!”

After Saron finished, a strong light came out from his whole body. The huge energy swept the entire palace like a wind, and even the palace also trembled.

King became speechless after saw Saron’s power, and he leaves the thought about being rebellious.

“Hey.” Vegeta was coldly smirked, and the next moment, he turned into a streamer and rushed out of the palace.

“You want to run? It’s not that easy!” Saron said with a smile, his eyes were red, he was beaten by a kid and also shot blood. He felt too shameful. Now, he just wants to kill Vegeta.

Saron’s speed was fast and he quickly chased towards Vegeta.

“Idiot, I am worried about ruining my palace.” Vegeta shook his head and said disdainfully.

After that, Vegeta came to the ground to stand and silently waited for Saron.

This place is outside of the palace. At the center of the ground, there is a tall Statue. This is the statue of this planet’s king, supreme leader of Saiyans, non-other than his father, King Vegeta.

Vegeta glanced at King’s statue and touched himself nose helplessly.

“Vegeta, you can’t run away from me. Today is the last day of your life.” Saron looked at Vegeta with a vicious look. And suddenly increased the momentum several times.

“52,000 combat power, you are much stronger than your brother.” Vegeta smiled mockingly. 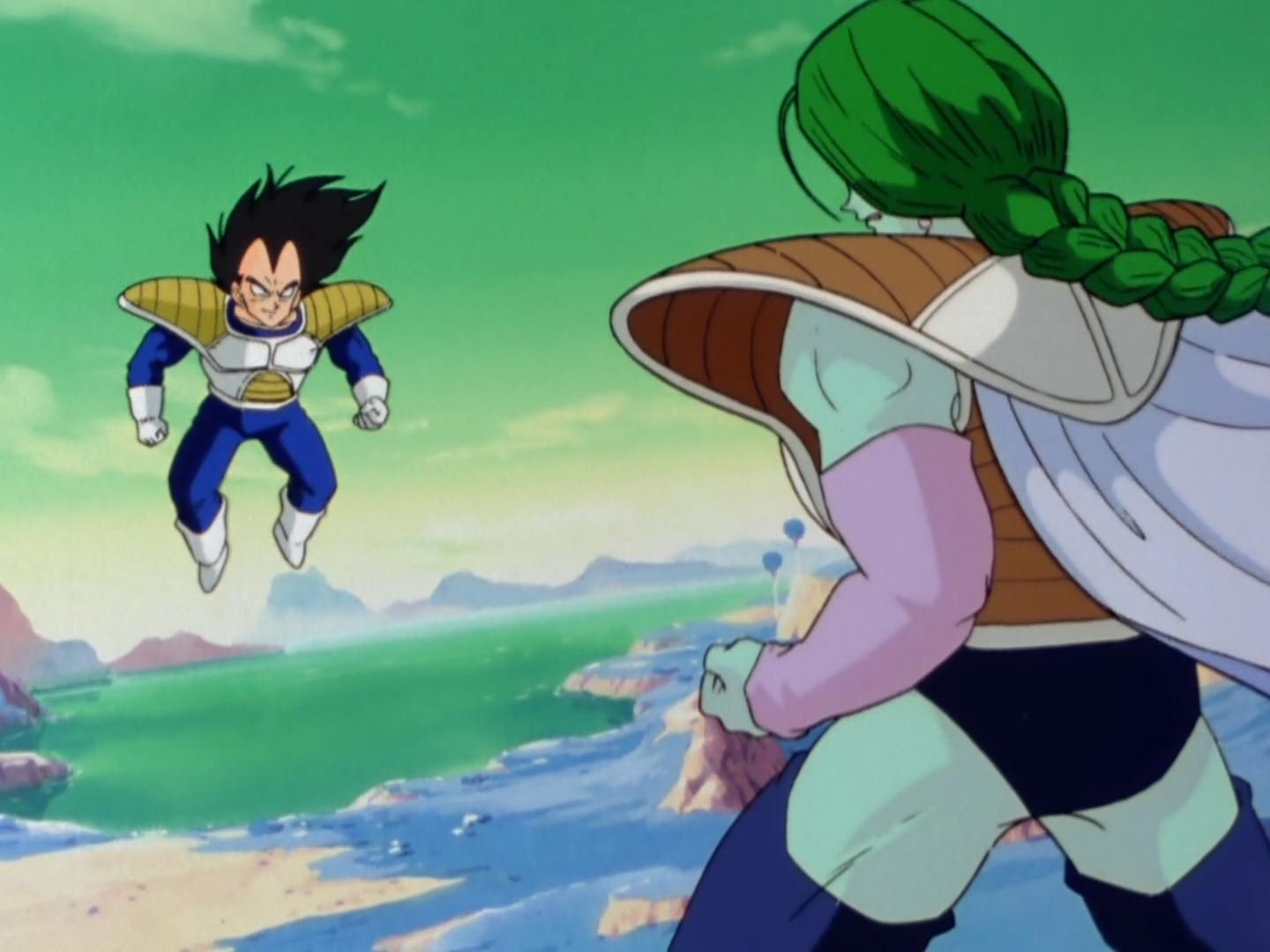 “Little monster, I will kill you!” Saron gnashed his teeth and waved a powerful punch toward Vegeta. He believed that if Vegeta didn’t die by this punch but he would at least disabled.

“There is something I want to tell you, which is about Frieza!” Vegeta said. But Saron will not pay attention to the words of Vegeta and continue to attack unscrupulously.

“Don’t you even listen to Frieza’s orders?” Vegeta screamed.

Saron suddenly stopped the attack, and he looked at Vegeta in horror and didn’t dare to move his fist forward.

“Don’t you know that Frieza has something important to me? Idiot.” Vegeta smiled and said.

“What do you want to say?” Saron’s body was stagnated.

“I said, Frieza brought me back from the earth because there is something he wants me to find if you kill me, then how do you tell Frieza about this? Vegeta asked.

“You…you…” Saron’s fist trembled for a long time, his mouth was stuttering and he was unable to speak.

Indeed, he can’t kill Vegeta now, because this is the order of Lord Frieza.

And he didn’t dare to go against Frieza?

For a time, Saron gnashed his teeth and stared at Vegeta. He really hoped that his eyes would burn alive the other side.

“It means you can’t kill me”. Vegeta said and smiled softly.

“You…you…you just wait, I will clear this account!” Saron said with his red eyes.

After that, Saron planned to leave this place soon, but who thought that when he just turned around to leave, he heard Vegeta’s voice again.

“You…small monster, what do you want to do?” Saron gnashed his teeth and asked, but he didn’t do anything to Vegeta.

He was afraid that if he shot Vegeta, he would accidentally kill him.

“You can’t do anything to me right now? But I can bully you!” Vegeta said, and then suddenly he flew towards Saron and directly throw a punch and hit his handsome face.

“You…” Saron yelled and his nostrils start bleeding.

“What am I? I am playing, idiot.” Vegeta flew again and came to the ground.

Saron went to Vegeta’s direction, he seemed to be violent, and his momentum continued to improve.

When Vegeta hit him twice, he didn’t use much energy because with his current strength killing Saron is a matter of moving a finger.

Vegeta doesn’t want to kill him, he wants to humiliate this guy, and he hasn’t played enough yet.

“You don’t dare to kill me, but I can kill you without any scruple”. Vegeta said with a smile.

“You, you, you… I will spare you!” Saron said furiously, and his hair almost stood up.

The next moment, Saron turned into a streamer and rushed to the direction of Vegeta. This time, he has already decided that he will not take a step back.

However, when Saron was about to attack Vegeta, he seemed to be punched high by someone, and then slammed into the ground.

Vegeta saw that a man-made full moon giant is protecting him. “How dare you bully my son, I will kill you!”

It wasn’t someone else who spoke, he was King Vegeta who turned into a giant.

At this moment, King of Saiyans was looked very prestige.

His huge body like a tall mountain, propped up the sky, his stalwart figure looked longer under the illumination of the sun.

For a time, Vegeta felt a small touch on his heart by the passionate words of King who turned into a giant, just to save him.