Just as Broly felt passionate about his identity, he suddenly heard a sound screaming so he looked at that direction then he saw that blood flowing from Paragus’s chest.

The initiator of this incident was Bana.

At this time, Bana’s palms had passed through Paragus’s chest, the blood was dripping from his right hand.

Bana shook his head then licked the blood from his own hand. It looked very disgusting. His eyes were full of bloodthirsty.

“You…you…” Paragus screamed with horror and anger, his face was pale. Then suddenly fell on the ground unwillingly, his eyes were widened and then he about died.

He knows from the plot of Dragon Ball that his father will control him in the future, so he doesn’t felt much affection to Paragus. So he also naturally doesn’t care for Paragus as for whether he is dead or alive.

Now, Broly was just concerned about his own destiny. He knows that King Vegeta will never let him go.

“Little devil, maybe you will be a good warrior when you grow up, but it’s a pity… you are going to die!” Bana said and smiled while he looked at Broly, his eyes were full of smiles.

After saying this, Bana looked at King Vegeta for permission and King nodded in acquiescence. Then Bana took out of his sword and walked towards Broly.

Broly thought that they are about to kill him so he should use his skills to protect himself.

Suddenly, Broly felt that there was endless energy in his whole body, whereby he could destroy this area at any time.

Broly found that his soul and body have been completely integrated into one, without any sense of discomfort.

The next moment, Broly’s left hand gently divert the direction of the sword which was pointed on his neck, and then his right hand punched on Bana’s chest. 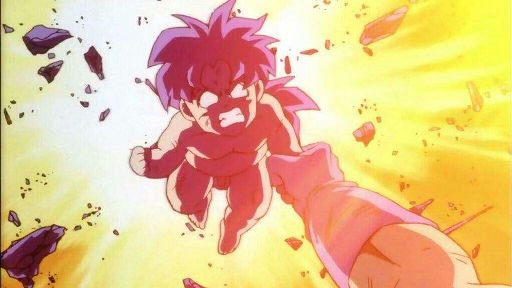 With a loud noise, Bana was like a shell, which penetrated the thick wall of the room and fell heavily on the ground.

The blood came out from Bana’s big mouth and his face was extremely pale.

Then he looked at the sword which he was held a few minutes before but now it shatters into pieces on the ground by the powerful energy of Broly.

Paragus stunned by his son’s actions.

His son who had just born, actually made a serious injury to Bana?

Paragus also thought that he was dreaming, but the physical pain told him that this is not a dream, it is all true!

Broly felt so excited. He didn’t expect that just after birth, he could almost kill a Saiyan.

For the first time, Broly felt the power of his body and the inexhaustible energy in his body.

Everyone was scared by this scene.

A small baby, who has just been born before few days, actually injured Bana so badly.

King Vegeta’s eyes also widened and he was speechless.

King already knows that this little boy was very dangerous because his combat power was 10,000 when he born but he never imagined that just after few days of his birth he will be able to use his power like this.

After Broly made a serious injury to Bana, he became more excited to feel his vast energy.

Suddenly, a stock filled with the will to kill, at this time poured into the mind of Broly.

Broly was subconsciously releasing all the energy in the body.

By his strong energy, the whole planet tremble and even the delivery room was crumbling. If it wasn’t who made with special materials, 80% would collapse.

10,000 combat power was enough to destroy the entire Planet Vegeta.

“Not good! He will destroy this planet!” King Vegeta was shocked and stunned, then a light flashed from his body and flew towards Broly.

Broly’s face had no slight fear when he saw that King personally about killed him.

Broly rose into the air, then he breaks the ceiling of this hard room without any hindrance, and went straight into the sky.

King didn’t hesitate, and with a few Saiyan people, he followed him straight.

At this time, Broly’s hands were condensed with a yellow-green flame, as if the sun was glaring.

“It’s a shock wave!” Broly was happy. He didn’t expect this that he can use this kind of trick so easily.

Moreover, there was no problem with flying.

Broly shouted, but after his voice came out, it turned into a cry of a baby.

Saiyan guards, who were around King Vegeta, were unable to withstand this tremendous energy pressure. Their faces were sweaty.

It’s hard to imagine that a newly born baby had such a powerful energy in his body.

Even the shockwave, he released were enough to kill most of the superior Saiyan warriors on this Planet.

When the shock wave hit King Vegeta, his surrounding area filled with smoke, dust and a strong smell of fire.

Broly found that this feeling is so wonderful, especially the ability to destroy the Planet.

At this time, the smoke around King Vegeta gradually dissipated.

King’s armor has cracked, but what makes Broly feel helpless is that King’s body was not hurt.

After all, he was the King of Saiyans so of cours, his combat power was at least 10,000.

“If this kid will grow up then he will be the end of Saiyans!” King Vegeta said worriedly to himself.